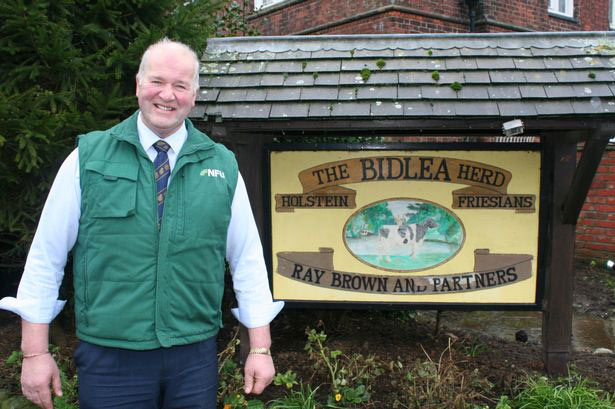 1. What makes you get up in the morning?

I have never had a problem with getting up in the morning and I believe it is the most productive time of the day where I do a lot of thinking. When I was younger and we were short of land, we were milking three times a day and would get up at 1.30am to do the first milking and go back to bed at 4.30am and get up again at 8am to milk again!

I enjoy what I do and look forward to getting up and doing it.

2. If you had a magic wand, what is the one thing you would change in the farming industry?

There are several things I would change, one thing would be to re-organise how we market milk.

One of the things that I am currently looking to do is to have an organised and up-to-date database of quantities of milk produced, by whom and for whom.

I hope this information will help the NFU and the industry to represent ourselves as dairy producers better than we are currently doing.

Quite simply what I am probably saying is that I wish I could wave a magic wand and take us back to the days of the Milk Marketing Board, and not make the mistakes that we have so clearly made.

Another idea I have and it comes from an idea from Somerset and developed by a person called Greg Parsons, is to set up a Cheshire Larder in which produce would be sourced locally and supplied direct to the retail, organisation or food producer such as hotels, restaurants, companies who cater for staff, etc.

I hope this will raise the profile of Cheshire Produce and add value to local products.

3. What do you believe is the biggest threat to the industry?

I would have said TB, however, I believe what is currently being done and the processes and procedures in place, we are dealing with it and the situation will only improve. I now think the biggest threat to the industry is fewer farmers using markets to set a price, and the lack of marketing we do of the products we produce. It needs a group approach to ensure that a fair price is paid.

4. What other interests do you have other than farming?

I have an interest in anaerobic digestion and have worked hard on developing a scheme, as I believe it is the technology that the agricultural industry can utilise to assist with hitting renewable energy targets. I am extremely supportive of the young farmers clubs, as I believe the YFC motto is so important for young people ‘LIVE A LOT!, LEARN A LOT! LAUGH A LOT! is so important for young people. I also have active roles with the NFU and the Western Holstein Club, as I believe promoting the industry is extremely important. I also like to travel and see how other countries do things differently to us.

My head says in, my heart says out and the two are still fighting and I am probably one of many who are still undecided. I think there is a lot of scaremongering out there about leaving the European Union and the truth will not be known unless we actually leave. Quite simply if we do leave it is all down to what kind of deal we can negotiate.

A part of me will be disappointed if we stay in the European Union.

This website uses cookies to improve your experience while you navigate through the website. Out of these, the cookies that are categorized as necessary are stored on your browser as they are essential for the working of basic functionalities of the website. We also use third-party cookies that help us analyze and understand how you use this website. These cookies will be stored in your browser only with your consent. You also have the option to opt-out of these cookies. But opting out of some of these cookies may affect your browsing experience.
Necessary Always Enabled

Any cookies that may not be particularly necessary for the website to function and is used specifically to collect user personal data via analytics, ads, other embedded contents are termed as non-necessary cookies. It is mandatory to procure user consent prior to running these cookies on your website.